You might be tempted to run for your life now that bitcoin and many other crypto currencies have been drastically decreasing in price. I don’t blame you, seeing your initial investment begin to decrease sucks especially if you bought towards the top. The truth is Bitcoin has always moved in cycles.

As you know Bitcoin has a total supply of 21 million, but only about 18.5 million at the time of writing this are actually in circulation. Out of the 18.5 million in circulation it is estimated that at least 3 million bitcoin have been lost since its inception. New bitcoin enters circulation every 10 minutes from the miners that are verifying transactions with a current block reward of 6.25 BTC.

The “halvening” or halving happens every 210,000 blocks witch equates to roughly every 4 years. In its beginning years bitcoin awarded miners 50 BTC per block and when it reaches 210,000 blocks the reward is then cut in half as seen below in the chart. 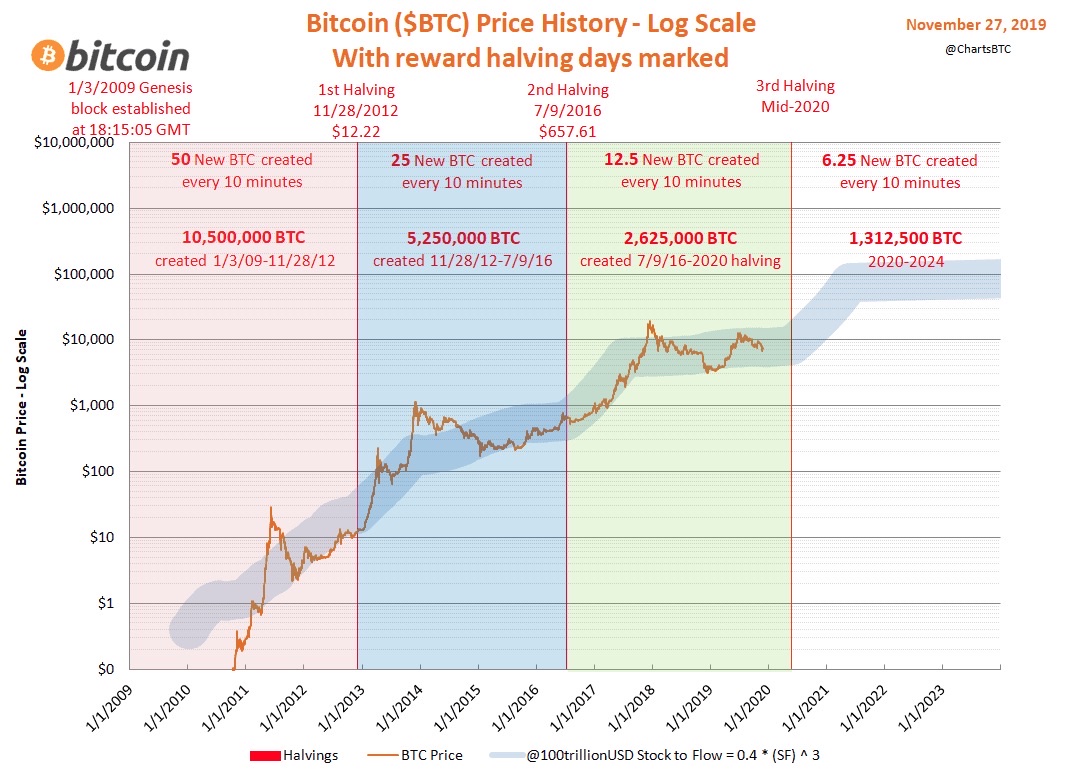 Well what does this mean for Investors? As seen in the chart Bitcoin has made a new high within a year to a year and a half after the halving. This happens for a few reasons. Investors begin to anticipate it (those savvy to studying the past performance of Bitcoin), the supply slowly begins to dry up and buyers are wiling to pay higher prices to buy it, then after it has gone up the news usually grabs hold of it and starts talking about its performance which drives new retail investors into the mix.

Just like everything else in this world nothing lasts forever. Bitcoin eventually begins to fall down inturn scaring investors both big and small witch than panic sell their holdings, then the news comes in and starts negative articles, which in turn fuels more sell off. It seems to be a big circle.

Now the past isn’t always guide to the future, and I could be wrong about this and maybe this cycle will break and act differently I don’t have a crystal ball although I wish I did. Bitcoin is Digital Gold and underneath it is a numbers game of supply and demand. If your feeling bad about buying at the top and being down on your position don’t give up, many people are in the same position . Even I found myself buying the top in 2018 and that’s ok. If you didn’t buy the first bottom buy the next one. Bitcoin still continues to be one of the best performing assets of all time.

Want to discuss this post? Join the community on the discussion page

In today’s world, investing has become extremely popular because of work from home caused by COVID-19. In a...

Hello Investors, This is the second edition of Credo Crunch, our weekly investing insights posts. The goa...